The year 1967 marked Canada’s 100th Centennial. Celebrations and projects were planned in communities across the country. The Willow Point Centennial Committee was formed at a public meeting in 1966, at the AI Collinson School, under the direction of Max Gordon, Recreation Councillor. Locals were selected to be on the committee: Max Carne, V.C. Owen, Janet Coates, Frank Varsveld, Pat Galbraith and Tom West. Mr. Varsveld was later replaced by Dick Haycroft. Jim Munro assisted in the capacity of School District Representative.

Quite a few projects were discussed at that first meeting. Eventually a picnic and recreation site on the AI Collinson School grounds, next to Duhamel Creek, was the plan sent to the Provincial Government for approval.

Regional Centennial meetings were held by provincial representatives. The Willow Point Centennial committee along with members of the Duhamel Recreation Commission attended these meetings. Centennial Medallions were made available to the committees to help raise funds for their community projects and grants from the provincial and federal government were available.

By the spring of 1966 a park and playground site at the AI Collinson School grounds had received final approval. “According to the 1963 census, there are 750 residents in the area between Kokanee Lodge and Kokanee Creek. The estimated total cost of this development at present is $2,250.00. We are to receive a $750.00 grant from the federal gov’t and $450.00 grant from the provincial gov’t. The balance of $1,050.00 will be raised by local contributions.”[1]

The committee organized door to door canvassing to raise funds and the Centennial Medallions were sold at local businesses. Community work parties were organized to do the physical work on the project. A Centennial Fair was planned for June 1967. Any proceeds would go towards the project.

The Centennial Fair was truly a community effort. Many residents and most of the community’s organizations took part in the preparation and execution of the event. Mr. Shannon donated the use of his field (4-mile) which took on the look of a frontier town for the day. The Men’s Committee to the Willow Point Scouts and Cubs organized and constructed the frontier town style booths. The Scouts, under the direction of Mr. Bert Learmonth, helped with the building and painting.

On June 16, 1968 the new park at the school was formally opened and the Centennial Committee officially turned the Centennial Park Project over to the Nelson School Board. The celebration was combined with the annual Duhamel Fun Day. 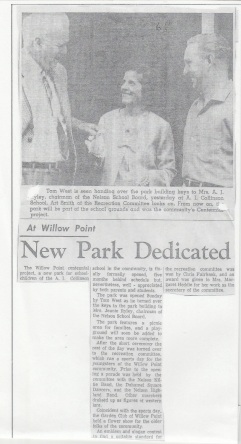 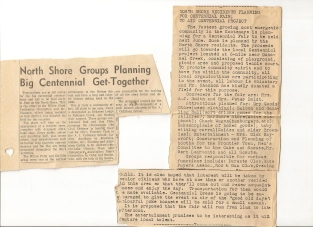 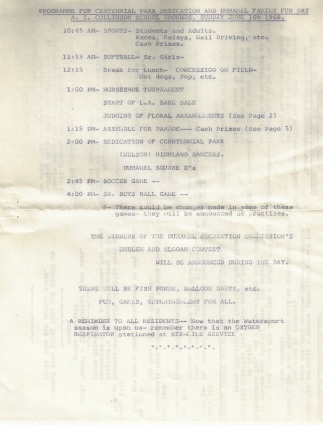